Whew! Great game by the Dawgs and they sure did prove me wrong! I truly thought the Florida hex was back on this year. I realized that I had not seen a Kirby Smart team show up for a game and not look ready to play as they did against LSU. That spooked me back into my old fear of the Florida Gators. However, UGA came out focused and beat down a very good team in Jacksonville. I was impressed with our second-half performance, and I am now back feeling confident again. There have been way too many bad losses to the dreaded team down in Gainesville for me to feel good about his game for a long time. I am glad it is over for another year! Jake Fromm turned in a wonderful performance going 17/24 for 240 yards passing, three touchdowns, and no interceptions. It was good to see him come back after a difficult day down in Louisiana. The way he guided the offense both passing and running, yes running, set the tone for the day for the rest of the team. The touchdown passes were right on the money which showed me he worked hard over the last two weeks to get better. Jake has become the QB1 for the Dawgs for the rest of the season. Jeremiah Holloman. I hope you know who he played an incredible game on Saturday. He had four catches for 48 yards and two touchdown receptions. These are not big numbers for sure, but the way he ran routes to get open was beautiful. He beat a very good cornerback for an over the should pass for his first TD in the corner of the end zone. It was a great pass and an even better effort by Holloman to make the catch. His next TD he was wide open with no one around him. Dan Mullen claimed it was busted coverage. I think Holloman saw the defense had a big hole, and he ran right to it because he knew Fromm saw the same thing. Last year Holloman did not even make the trip to play in  Jacksonville! He has come a long way and is now part of the history of this storied rivalry. 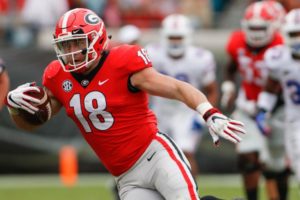 The Dawgs leading receiver was #18, Issac Nauta. He had five receptions for 73 yards. It is about time we started using our talented Tight ends! The last drive of the first half was all Nauta the whole way down the field. He was able to get open against a talented Florida defense and then get yards after the catch. He also was heads-up enough to get out of bounds to stop the clock. Seeing him have a big game makes me happy since he is always doing the blocking no one else wants to do in the trenches. Issace is from down the road in Buford, and you could tell when he was sixteen years old he was going to be a great football player. I will be the first to admit the Dawgs had a lot of things go their way all game long. Florida says they had unforced errors, and I say we forced turnovers. Richard LeCounte picked up a fumble and almost had a scoop and score. I think that play was the start of Florida realizing this was not their day and started to have doubts about winning.  Our run defense was looking weak most of the first half, but we were able to hold the Florida offense to just ten points. I could tell adjustments were made during halftime because the Dawgs had some new players in on defense. Florida had an impressive touchdown drive to start the third quarter, but after that, it was all Dawgs defense the rest of the game. The Gators never saw the end zone again and did not score another point. I don’t like the Florida Gators! I can’t say that strong enough and keep the comment clean. However, when I see a defense do what that did on the goal line, I have to say dang good job! The Dawgs recovered a fumble on the one-yard line, and I was yelling that this would be the final dagger of the day. There was no doubt in my mind we would score a touchdown. How could we not with our big offensive line and our stable of big running backs? Well, after six attempts we were only about a half inch closer to scoring a touchdown. The Gators were determined to stop the Dawgs from getting into the end zone, and they stood tall and strong. All eleven guys on the Gator defense have a lot to be proud of because I doubt you see a stand like that for a long time. So, I will say something I have never said before. Good job Florida!

My good friend Adam Lindsay was very gracious in defeat. He was the first to text me to say congratulations. Later my other Gator friend Judge Reisman was also gracious in defeat with her text. These two make me almost kind of sort of maybe like some Gators. That is until next years game. 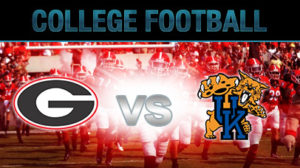 Close your eyes and pretend you are listing to Larry Munson. I think he would say “so we gonna rumble on up to Lexington to play a very talented Wildcat team.” “ It will be us against the world because everybody else in the SEC wants to see a Kentucky team finally get a chance to play in the SEC Championship game.” “ Folks these are not kitty cats! They got some mean players on defense and this Snell kid could run all over us!” It for sure will be the Dawgs against the world because Kentucky is a feel-good story, and I would be a Wildcat too if it were not my team playing for the SEC East. I get it.

Since I said earlier, I am back feeling confident I can say the Dawgs will tame the Wildcats and take the East for the second year in a row. Go Dawgs!