The Dawgs beat a good Vanderbilt team in Nashville on Saturday in front of a great group of traveling fans decked out in red. When I turned on the game, I could not believe the sea of red in the stadium, which looked like a home game for UGA. I was proud and amused that the Commodores had to go to a silent count to get plays off early in the game. The Dawgs won big and several players stood out on the field. Some fans have already found reasons to worry, but I felt we played a great game to start the season. Georgia came out on fire and scored on their first three drives of the game which all but ended any chance of a Vandy victory. The big offensive line opened holes for our stable of running backs to bust through for huge yards at a time. I was so happy to see Demetris Roberson, D-Rob, score the first touchdown which was his first touchdown for Georgia. I admit I was none too happy when he first picked California over UGA coming out of high school. It was easy to see the guy is an athlete, and I wanted him in red and black bad! So, I was thrilled when he transferred and paid his dues last year learning our system. I think he will be a big-time playmaker for the Dawgs this year. I like to read message boards about all UGA sports which is often not good for my mental health. It was predictable that fans would start moaning about how our offensive line is overrated when the offense bogged down in the second half. My thoughts are that Vanderbilt is a good team and are led by a dang good coach in Derrick Mason. Coach Mason and the team are good enough to make adjustments at halftime to slow down our offense. They don’t want to get beat 50 -0, and they stepped up their game. The big boys up front played a fine game and fans should not be worried about that part of our team. Our starters average 323.6 pounds, and our second team averages 321.6 pounds! I have no doubt these young men will get the job done when they are needed. That man D’Andre Swift was at it again rushing for 149 yards on 16 carries for an average of 9.3 yards per run. Again, the big offensive line did the job leading the way for Swift, Herrien, White, and Cook to terrorize the Vandy defense. 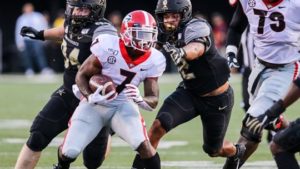 I, along with all Dawg fans, was excited to see #3 Zamir White run the ball for the first time in a Georgia uniform. When he came into the game, the crows chanted Zeusssssssss! Young Mr. White did not disappoint and had several electric carries that sent the crowd wild. Georgia looked good, and I can’t wait until the Notre Dame game! Next up for the Dawgs is the Murray State Racers. The team from Murray Kentucky finished 5-6 overall and 5-3 in the Ohio Valley Conference. In the past, I would not give this game a second thought. However, after Georgia State fantastic victory of Tennessee, I will give the Racers the benefit of the doubt until Kick off.